Kaboom. I am officially lost for words. And my palate is sufficiently wrecked. I may have said previously that bigger is better; this is nuclear. Ab. So. Lute. Ly. Love it!

I got so carried away with enjoying the beer that I didn’t want to wreck the moment by writing any significant notes. Or photos. In fact the only reason I got a photo at all was because my lovely wife reminded me before I managed to finish the glass. And then she had to take the photo too. 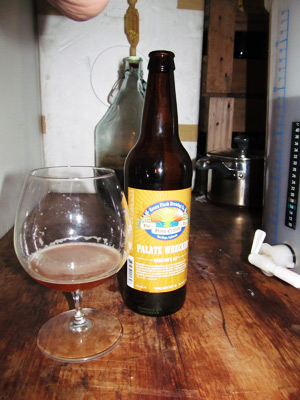 Palate Wrecker is a big beer for big boys, so big that it needs the extra ‘I’ in front of the IPA (that stands for Imperial; which tends to mean bigger in every way).

The beer poured a bright orangey-gold with a big head.

It reeked of tasty tropical fruits. The flavours also backed this up somewhat along with a massive bitterness that lasted well after the beer was gone. There was a good amount of carbonation, which may have helped the bitterness settle in.

This was one of the best beers I have had in a while, but then I’m a mad hophead. And if you want to try it you better hurry because I’m planning on going back to the store and getting the rest of their stock for August’s return to the booze.