(I had my fingers crossed)

Now you might recall when I made this commitment I said that I was going to make one allowance, which would be for a 100ml taster of our latest homebrew. As it turned out my lovely and supportive wife splashed out and donated $25 to adults living with cancer in the form of a Golden Ticket for me.

Not one to let a good thing go to waste, I imbibed on two thirds of the bottle of our American Pale Ale; Wet Sprocket (some of you might get the reference, I have a feeling Yeastie Boys’s Stu will if he reads this).

The beer poured a golden, orange colour with a rather small head that didn’t really stick around.

There were sweet aromas emanating from the glass that I couldn’t pin down, a generic malty type of sweetness.

In the mouth, I found it to be rather light bodied with good carbonation and a dryish finish.

I wasn’t particularly impressed with the flavour profile, and I think the malt bill may have backfired on me. It tasted malty, bready and was accompanied by a brassy /metallic flavour, a flavour I often find in beers from the brewing giants. The Wet Sprocket pale ale had a fair amount of bitterness which didn’t help its case much.

I had high hopes for this beer when I tried it before the conditioning period but ended up a little disappointed. It’s certainly not a drain pour though, I have plenty of mates who’ll help make room for the next batch.

I’ve been given a few tips to improve the next one and give the beer more balance, so I’m looking forward to putting another home brew down. Thanks, Kelly. 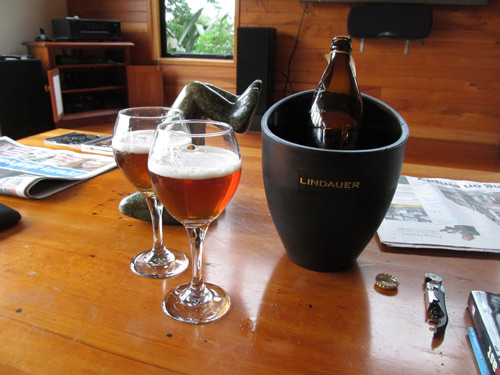