In a calculated move to assist the craft beer movement amongst my mates, I hosted a beer tasting last weekend.

Growing up with these boys and girls, they’ve always been a pretty hardy lot when it comes to alcohol retention and big beer consumers (though I refuse to divulge what beer in particular is their ‘go-to’). A group of us had got together on a few occasions at Deep Creek Brews and Eats in Browns Bay and I had taken note of the new found propensity for better beer… something that needed nurturing.

As much for my own knowledge as the group’s, I began the afternoon with a blind taste test of four widely available, mainstream New Zealand draught beers. My fiancée and Mum labelled up the tasting glasses away from prying eyes and then proceeded to distribute the ambiguous beers to the group.

Sniffing, tasting and discussion ensued. To ensure the task wasn’t impossible, I provided everybody with the names of the four beers and participants only needed to match that to the sample. The only thing we all agreed upon, was that the beers were all very similar. As it turned out, nobody could match all four samples to their names and only six of the twelve people managed to get two correct.

From here, I had organised another 14 beers to highlight different styles, including some 2011 NZ Brewers Guild Award winners, some international beers and some beers I consider to be rather extreme in their flavour profile, or at least far removed from the norm.

We started easy with a couple of different wheat beers, one from Tuatara Brewing and another from Ballast Point in San Diego before progressing on to one of our home brews.

After this I had placed the first of the ‘extreme’ beer styles, a sour beer in the form of Rodenbach’s Grand Cru. In retrospect, the order I put the beers could do with a review (see the full order below). I expected the sour to have a fair amount of cut through on the palate and at the same time act as a bit of a cleanser but I didn’t expect it to be quite as aggressive as it was. I think this could have been placed much later in the evening  and still achieve both those tasks more than adequately. 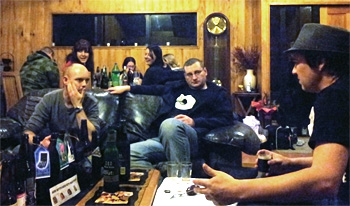 Another of the beers I felt was in the wrong place was Orval. I had originally pegged Ben Middlemiss’s Nota Bene for this spot and wanted a strong presence of funky notes from the Brett. With the Orval chasing up big bitter beers like Armageddon and our home brews, it felt as though we were missing something and a lot of the delicate flavours were lost despite ensuring everybody rinsed their glasses and palates with water prior.

The pale ales and IPA’s were crowd favourites as expected and while we tasted the Epic Armageddon I felt it would be prudent to plug Hop Zombie’s impending arrival and tell everybody to grab one if they saw it… and hopefully share it with me.

To end the tasting there was only one very clear and obvious choice of beer; Yeastie Boys Xerrex. I’ve had Rex Attitude before, so I had some idea of what to expect and knew that most other beers would struggle to follow it and after 14+ beers, Xerrex would still leave an impression.

In my experience, Rex is always rather polarising, and Xerrex was no exception, but it was good to see we had a few people who liked it and were marveled by the amount of flavour that comes from such an unassuming looking drop.

Over the evening I may have dropped a few palates in the deep end, but everybody came away happy and now have a better idea of the amount of flavour possible in one of New Zealand’s favourite beverages. 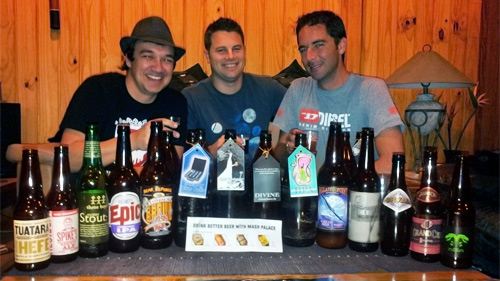 Full order of the beer tasting: