The second beer on my countdown to Dry July is another fresh-hopped beer, this one from Renaissance Brewing in Blenheim.

Benelux Ale is a Belgian inspired blonde ale that has a large addition of freshly harvested Wakatu hops.

The beer poured a golden orange colour with aromas of toffee and ‘funk’. I’m not really sure how to elaborate on the funk aromas, now that I’ve found it in some previous beers those are the only things I think of (Nota Bene). The missus said “olives”, and to prove her point she pulled the jar of olives out of the fridge and waved that in my face. I did have to agree that there was some similarity with the briney green olive solution.

I also picked up a familiar hoppy aroma when I first poured the beer into the glass but it was then overtaken by the toffee and I couldn’t pick it up again.

In the mouth there is a sweet toffee flavour, almost toffee apple like. Then the carbonation cuts in and pulls the sweetness off the tongue letting a mildly aggressive bitterness take over and ride out.

This was another great beer that I wouldn’t mind grabbing some more of. The belgian yeasts and 7.0% abv suggest that it would age well but paradoxically, fresh hop flavours tend to die away over time. But that may be just my opinion. 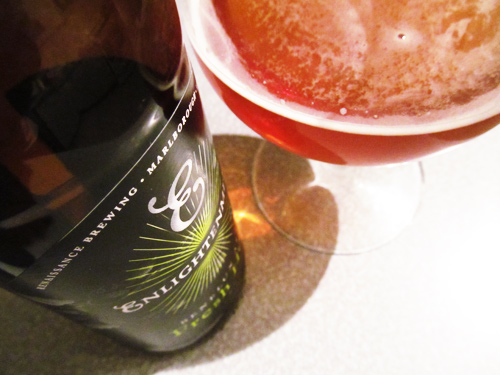